The stones in this bridge are not all in a perfect state of repair.  That’s part of its charm.  I’m just back from a couple of days down at Jianshui, a historic town a few hours south of Kunming with a large city wall and a towering city gate.  The trip has made me reflect on history and authenticity.

Getting to Jianshui on national tomb sweeping holiday meant braving the train station – a place which was overwhelmingly stuffed with thousands and thousands of domestic travellers, off somewhere or other. In 2015, Chinese tourists made four billion domestic trips, twice as many as in 2010. That number is a lot more than the 122 million trips they make overseas each year. (In 1976, 500 Chinese visitors came to Australia – approximately 10 per week on average. During 2016, more than 23,000 streamed through arrivals gates every seven days (http://www.sbs.com.au/news/article/2017/02/13/chinese-tourists-drive-tourism-record-more-two-arrivals-minute). So the Chinese are on the go. They have a ‘middle class’ of 400 million. They are mostly new to travel, and many bring a deep naive realism to their worldview. And its worth thinking about what this means. When I take the subway in Kunming a voice over loudspeaker tells me to not spit on the floor or talk loudly. A Chinese tourist walking into a Parisian cafe, sitting down, hacking loudly and then spitting on the floor, does not do China’s reputation any good, and the government is aware of that.  Beijing has recently created a list of nine sins that can earn transgressors 2-10 year travel bans.

Anyway, back to Jianshui. The streets are cobbled and there are several temples in the town. Wooden gates frame major streets. A thousand years ago this was a significant transport hub on the southern Silk Road. Hearing the ancient bronze bell resonate in the darkness at the base of the tall multi-tiered gate to the city, I imagined hearing this sound fifty years ago when it did not compete with traffic noises, and its resonant note would have spread out quietly but powerfully over the lives of the city.

As it was a national holiday weekend the place was packed with domestic Chinese tourists. The crowds were shuttling between Western style shops selling handbags and makeup and jeans, and historical monuments that looked suspiciously ‘renewed’ by enterprising Chinese builders in cohort with government authorities. Where was history to be found, I thought, despairingly?

As I wandered the town I saw shonkily completed ‘historical’ building jobs, many now peeling or fraying, and showing their modern concrete blocks beneath the facade. It was like walking through a Hollywood film set that was coming apart at the seams. The tourists didn’t seem to mind, happily snapping selfies with their phones against a background of such ancient ‘history’. What was real, and what was fake? The tourists seemed content to consume a simulacrum of history just as quickly and uncritically as they would consume the shiny products in the shops that lined the roads. 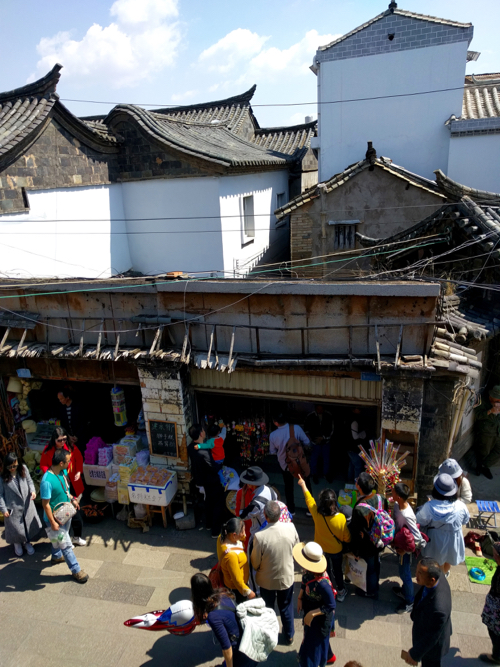 What’s going on here? Sure we all know that China is the world’s biggest producer of fake handbags, phones, clothes and other consumer items. Some people estimate that 30% of alcohol sold in China is fake (often containing antifreeze and other highly toxic ingredients). China is also the world’s biggest producer of forged antiques. They have their own Eiffel Tower in China – seeing photos of it leaves me feeling queerly sick. It turns out that several museums in China have been shut down after discovery that many of the items on display were fakes.

As I walked around the large and imposing city wall of Jianshui, I realized that its perfectly finished stone work and lack of missing stones or signs of age indicated that it was actually not ancient at all.  This city is a commercialized tourist site, full of replica buildings, and that includes its imposing city walls. That would shock most UNESCO experts, and rightly so. China recently turned a beautiful ageing section of the Great Wall of China into what looks like a modern elevated bike path with a smooth top. This is history dating back to 220 BC. Giving facelifts to national treasures doesn’t seem to shock the average strolling, camera-totting, domestic tourist however. It certainly doesn’t shock government officials who like the idea of increasing tourist dollars spent, and who orchestrate such civic-scale fakery. Western tourists are bound to find the inauthenticity of such places off-putting, and I’m sure many Chinese who care about the conservation of their built heritage are also dismayed. Imagine Ankor or Petra ‘cleaned up’ and rebuilt. It would instantly be the death of these places.

China was a great empire at the time of Christ’s birth. Its a place with plenty of human history. However Mao Zedong’s Cultural Revolution in the 1960s and 70s aimed to wipe out the “Four Olds” (old customs, old habits, old ideas and old culture), and during the period much was lost. 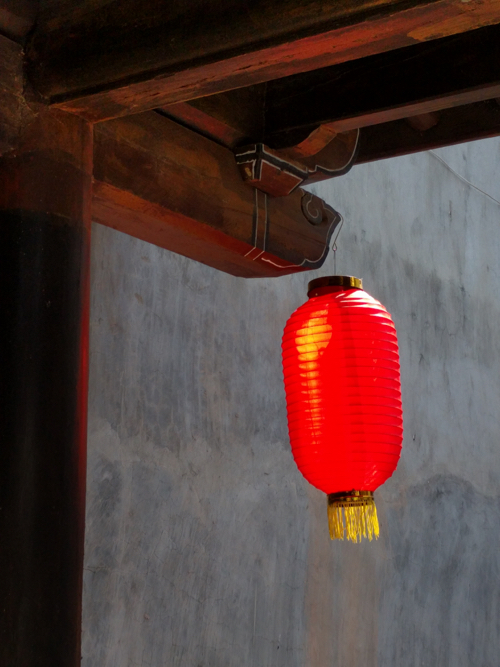 Next I went to Tuanshan, a small village from the Qing Dynasty, near Jianshui.  Here I saw a more authentic version of history. It included the old, but also evidence of the way in which Mao’s Red Guards had wanted to smash that legacy. 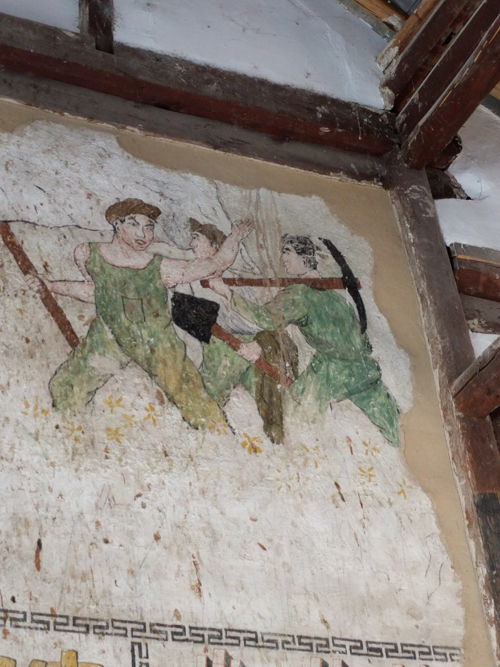 This old village was a palimpsest of propaganda slogans of crusading workers painted onto ancient wooden walls, and sitting alongside laughing Buddhas, and statues of Taoist deities.

Not all of the architecture was Han style… 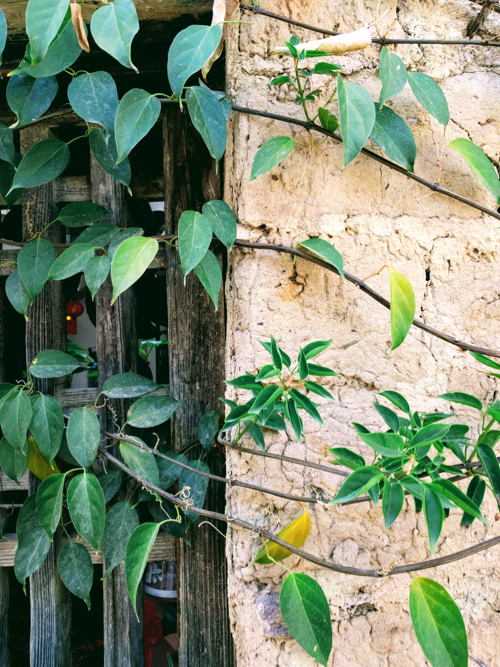 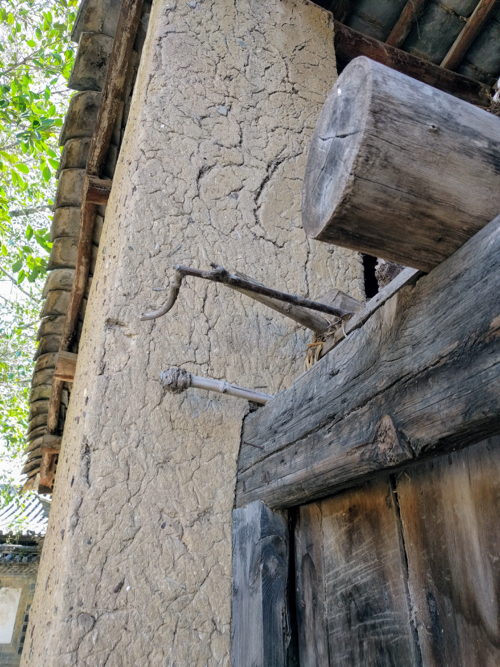 It really wasn’t a living village –  you had to pay $8 to get into the village in the first place.  There had been some reconstruction, but at least the wood work here seemed fitting and less garish. A moongate has a beautiful sense of transition from one space to another – somehow bringing a greater sense of threshold and transformation than a regular rectangular door. This building was originally a shrine, but was turned into a primary school during the Cultural Revolution.

I noticed an old man walking with his grandson.  Child-rearing by the grandparents is a common habit in today’s China where everybody who is able is working to make money. 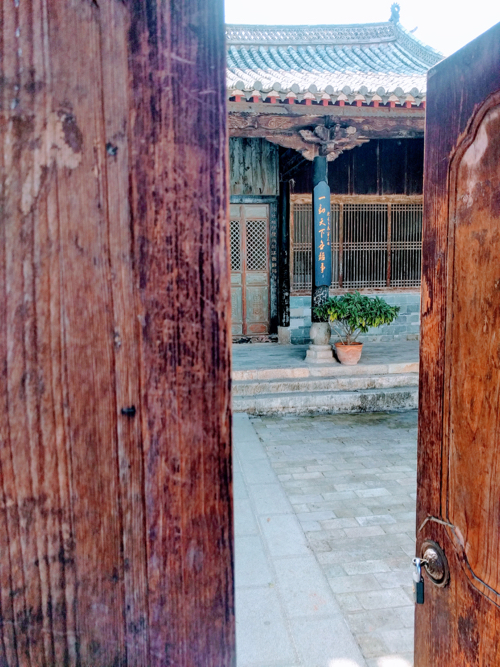 The enclosed courtyards gave me a feeling of peace and quiet.  As many were empty of tourists, and I was able to sit and imagine that I was in an older China, looking up at the blue sky above the green oasis of the quiet courtyard. 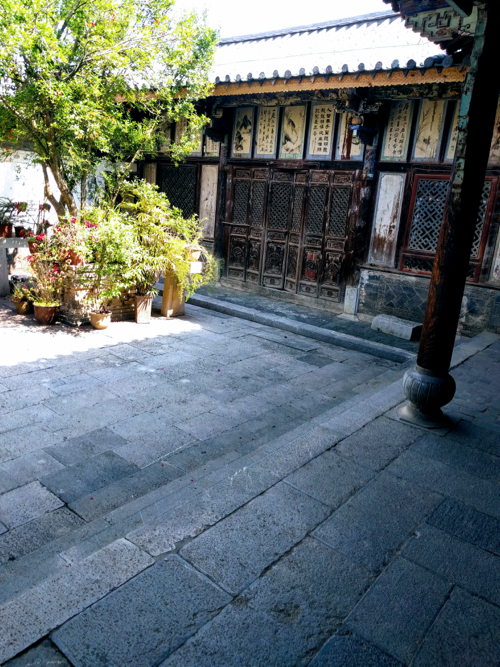 As I sat in this courtyard, for the first time since being in the country, I felt like I was actually close to China’s human history.  I felt at ease, sitting by myself in a stone courtyard with a small garden in its centre, with thick wooden posts dovetailing into stone bases, and a patina of great age and long use over everything. I could imagine that such places were perfect for meditation or drinking green tea and reflecting on the world.

Elsewhere I entered another family home… 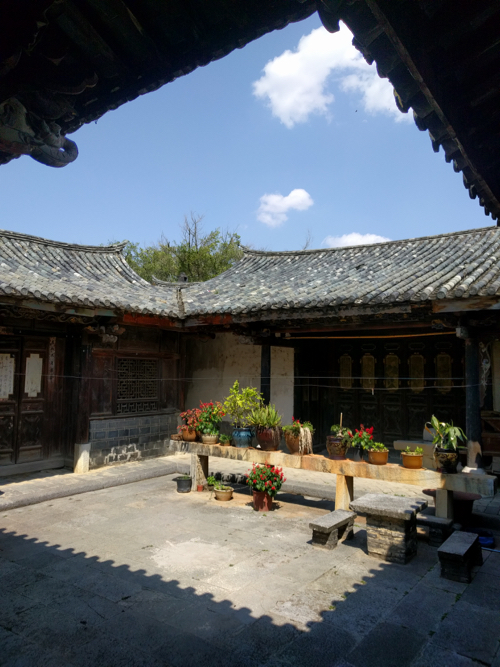 There is nothing more classically Chinese – architecturally – than an inner courtyard for the family to meet in. There are no windows on the outside walls. Two-courtyard houses were for the wealthier families. You can see in this home Mao’s statute still sits in pride of place on the family shrine. Wandering into a temple in the village I noticed the following… Is that Monkey Magic?

Monkey is based on a 16th century Chinese novel Journey to the West, which is based on the pilgrimage of the Tang dynasty Buddhist monk Xuanzang who traveled through Afghanistan and other regions to India, to obtain Buddhist sacred sutras and bring them back to China.  Xuanzang – called Tripitaka in English versions – had disciples, and they included Monkey, an intelligent and violent sage; Pigsy, a reliable fighter with a large appetite for food and women; and Sandy, a dependable and hard working fellow. As they travel through mountains and gorges, the companions battle monsters of all kinds, many of which turn out to be escaped celestial beasts belonging to bodhisattvas or Taoist deities.  Monkey was made into a tv show, filmed in north-west China and dubbed into English, which was popular amongst Australians kids who watched it when it aired on the ABC in the 1980s. It was strange to see old sculptures of figures that inhabited my childhood imagination here in a traditional Chinese village.

Monkey was born from a stone egg that forms from an ancient rock created by the coupling of Heaven and Earth. He is immortal and has an impish, forceful personality. His primary weapon is a staff that he can transform into any proportion. He is a trickster hero, on a journey into the unknown, and his violence is tempered by the pacifist approach of Tripitaka. So odd that motifs from ancient Chinese folk mythology should enter the imagination of young Australian children through the vehicle of a tv show, and that they should resurface in my mind as I wandered through the village of Tuanshan.

In the same temple I found old sculptures of the Buddha… And yet not far away in the same temple there are statues of Taoist deities. 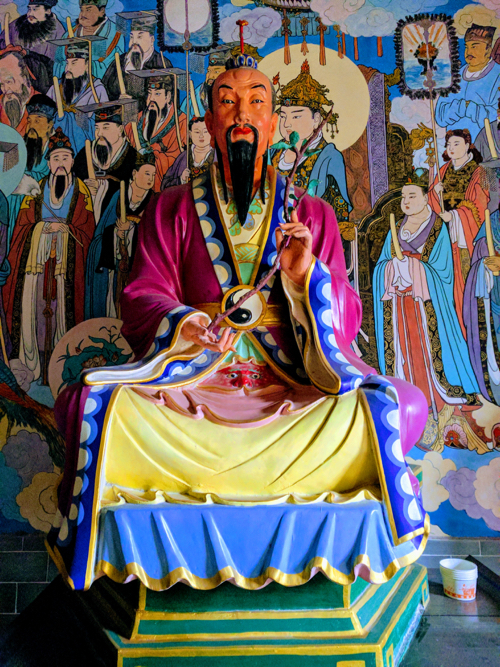 Much of the basis of Taoism is found in a philosophical text, the Tao Te Ching, which dates back to the fourth century BC.  The Three Treasures, the basic virtues of Taoism, are outlined in the Tao Te Ching: compassion, frugality and humility.  In the Tao Te Ching we hear that: He who knows he has enough is rich (chap. 33, tr. Feng and English).  Perhaps this Taoist figure is illustrating this by holding a simple branch with green leaves on it.  Certainly the figure is illustrating the importance of naturalness and simplicity for Taoist belief.

Back in Jianshui I had found a traditional home, now turned into a boutique hotel, which had a classical Chinese garden in. In the garden, twisting and warped stone boulders represented the mountains of China’s landscape. The viewers eyes never sees all of the garden at one time, but rather artful obstructions lead the eye further into the scene, revealing beauties not seen at first glance. Concealment and surprise gratifies the visitor to such gardens. The Chinese garden usually has a pond, the softness of the water and its translucency contrasting with the hardness and solidity of the rocks. 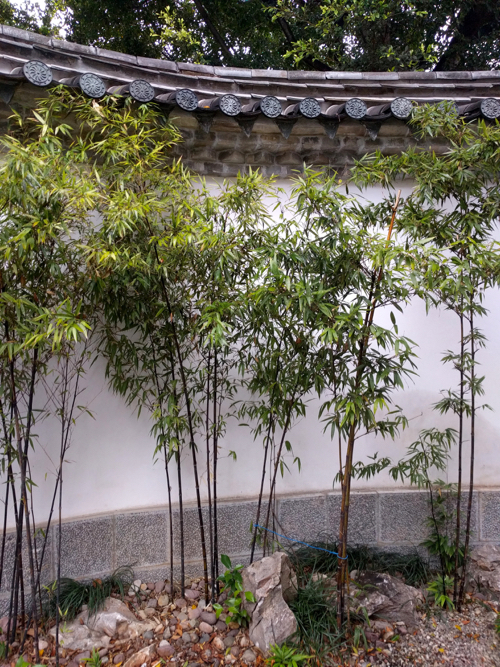 Bamboo has the structure of a hollow straw, and in the Chinese garden it represented a wise man who was modest and sought knowledge.  Bamboo being flexible can weather a storm without breaking. Being a lover of bamboo I liked the symbolism.

I’m glad I’m finally experiencing some of China’s human history away from the sound of the cash register. 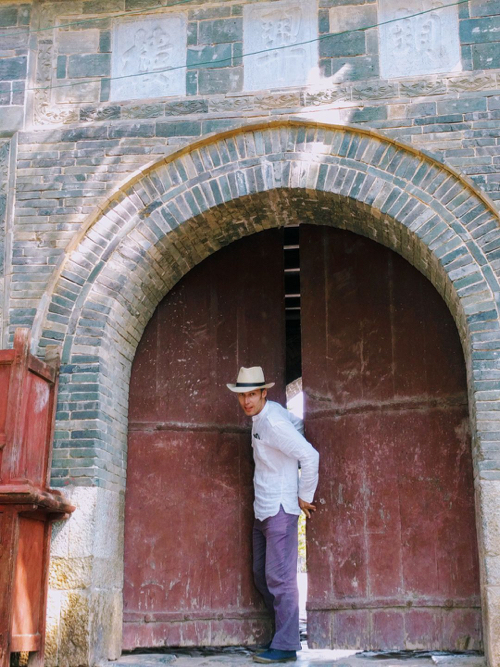 ← Remembering Another China in Kunming Interview on Stepping Off: Rewilding and Belonging in the South West →