China – Arrival in the Middle Kingdom 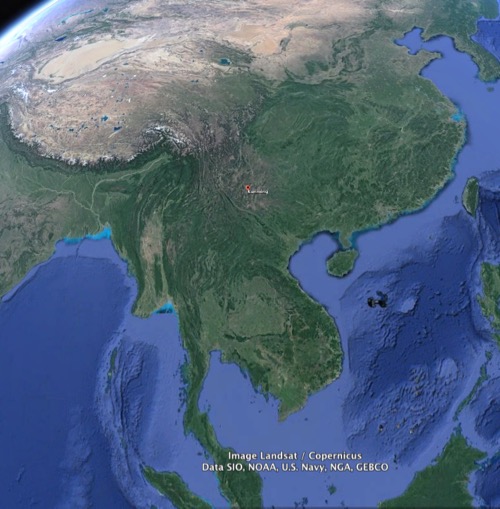 I’ve arrived in Kunming, the little red dot you can see on the map above.  I’m here to teach research skills to undergraduate students at Yunnan Normal University.  As you can see, I’ve come to a point where the foothills of the Himalayas fold up into a bunch of deep creases.  Yunnan province is the area of China with the deepest canyon on earth (2.5 kms deep Leaping Tiger Gorge).  My university is at 2000 metres altitude.

So I’ve arrived in China, and my first impression?  Everything is very, very big, and very, very new.  My university is about 40kms south of the main city, and is part of the city of Chenggong.  The university and surroundings were only built in 2006, and until then the area was rural land.  Here’s the university campus in the top of this image. 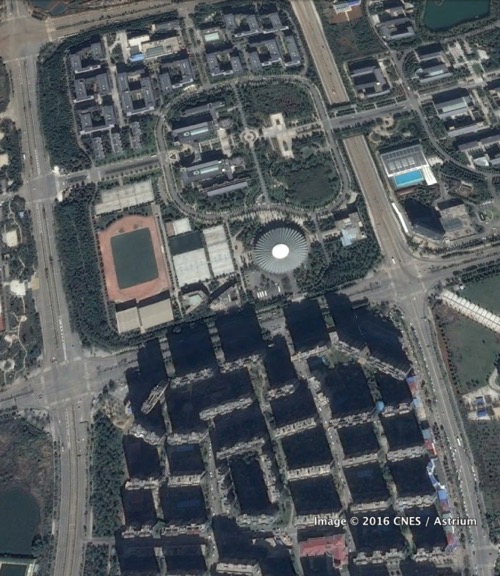 Those dark shadows at the bottom of the photo are very tall residential apartment blocks.  Here’s what they look like standing on the university campus and looking south. 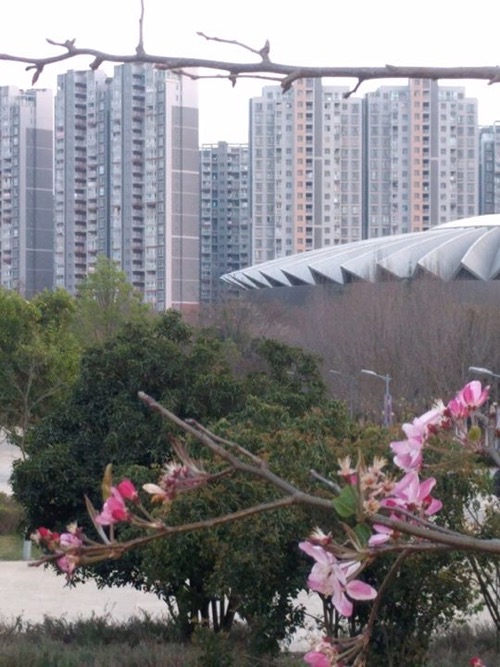 Chenggong was one of China’s famous ghost cities until the last couple of years when some life has emerged on the streets.  If you don’t know about China’s ghost cities, they are the result of massive construction of office and residential apartment buildings and roads, which propped up economic growth for the country, but which were eerily empty for years after construction had finished.  Production overshot demand.  Tumbleweed rolled down the main street.

Even today Chenggong has vast freeways and very little traffic.  Vast apartment blocks, but many dark windows at night.

I’d heard about the scale of China, but I wasn’t prepared for the shock of how incredibly big everything is.  Here’s the main library on the campus.  It houses over 3.2 million books. 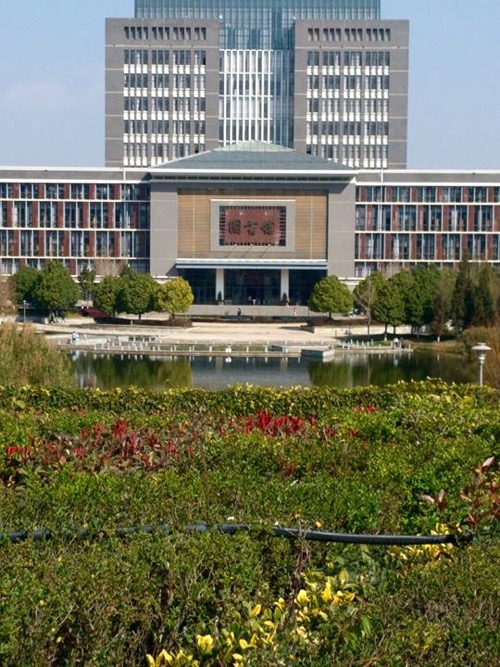 The canteens on campus are three story affairs that hold thousands of students at a time.  I’ve never seen anything like them. 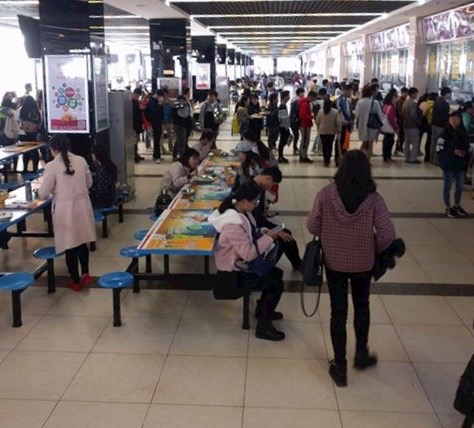 The food is delicious generally, even though I’m sometimes concerned about food safety in China.

There are 6 million people in Kunming and its one of the smaller cities in China. In Yunnan province there are 47 million, which means that this, one of the most sparsely populated provinces in all of China, is about twice the size of Australia. There is a cinematic quality to this place as I walk around the university campus of Yunnan Normal University at Chenggong – its sense of being slightly unreal – so new, no history, so planned, so gigantuan in scale and size. 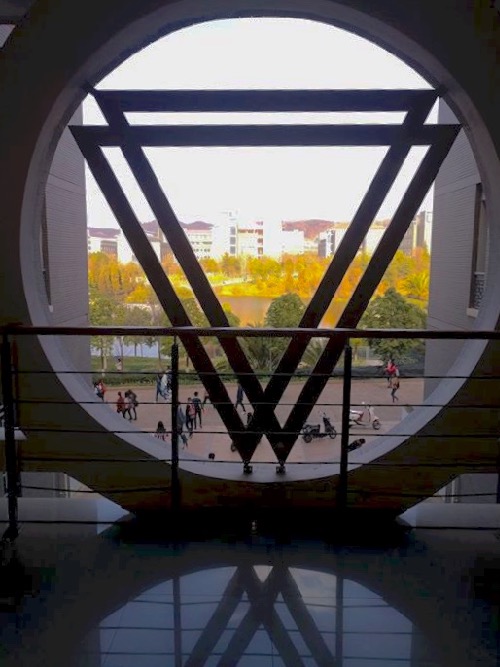 That’s the symbol of my university – I can’t help thinking that it seems vaguely corporate. 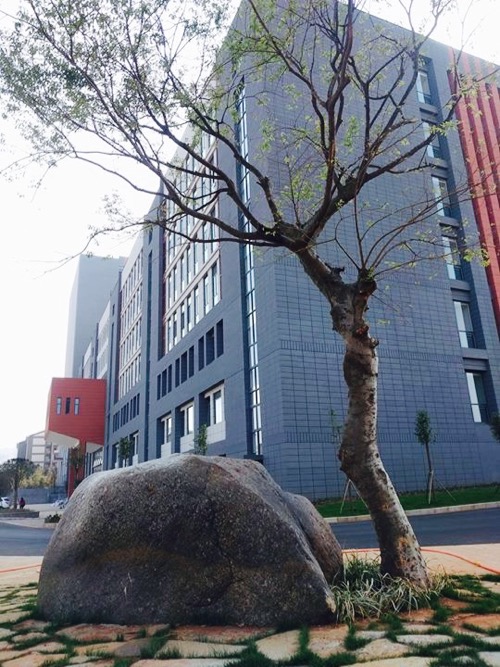 Everything here is so new it shines.  One of the nicest aspects of the campus is the large stone boulders they have brought in and are seen dotting the landscape here and there.  But what a contrast between nature and history and human artifice and building in the above photo.  You can see which of the two sides – nature or culture – dominates this landscape.

There are sliced boulders set up as tables across the campus which is nice. 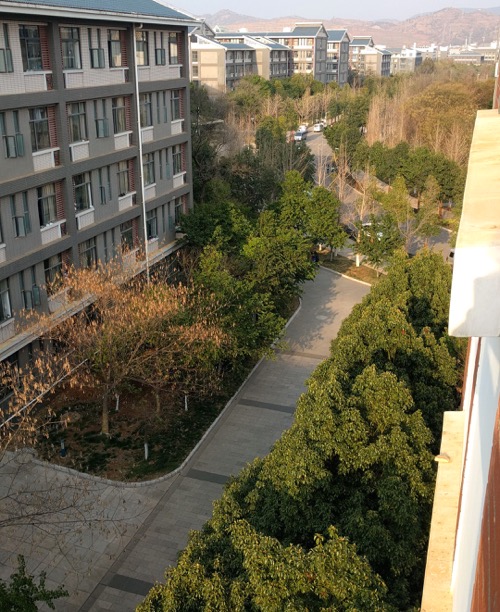 This is the view from my apartment building, looking east to the mountains.  Everything is new and quiet, and the spring air isn’t too cold. 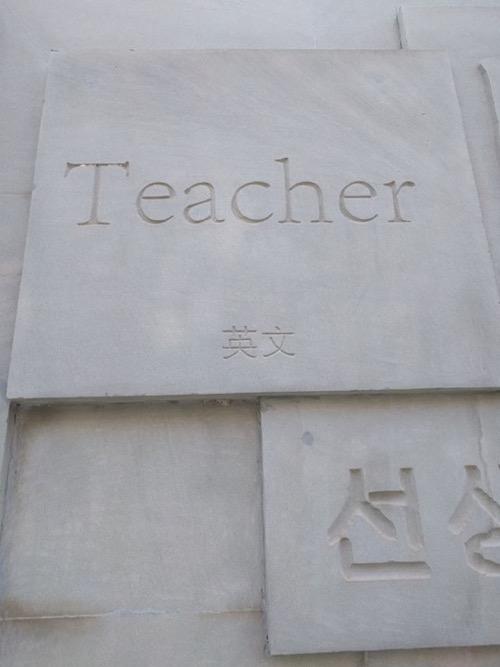 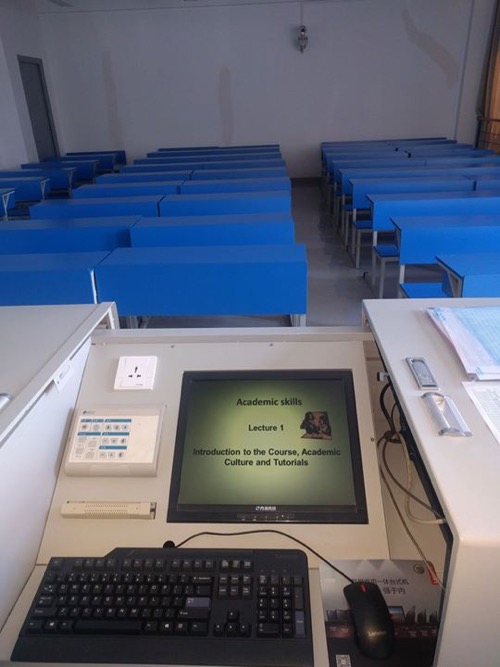 Apparently the students had been given the wrong room number and the problem was soon resolved.  But it was a rocky start.

I’ve already been struck of the different style of learning in China. 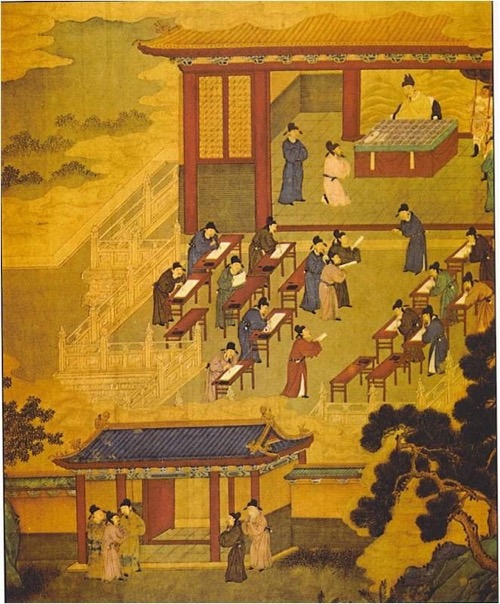 This country has had thousands of years of memorising Confucian classics for the Imperial Examination, and although that was discontinued in 1905, even today rote learning rather than critical thinking is the order of the day. Part of my job teaching research skills to third year university students is to introduce them to some of the differences in academic culture between what they are used to, and norms in English speaking universities. I’ve even gone back to provide them with a little bit of history of how learning has developed with its origins in the Groves of Academe of classical antiquity. 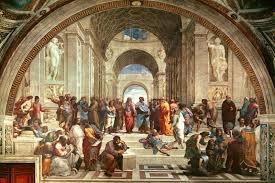 Raphael’s School of Athens even made it onto one of my lecture slides.

Hopefully next time I write here I’ll have seen more of Kunming and Yunnan.  For now a old woman sweeping leaves… 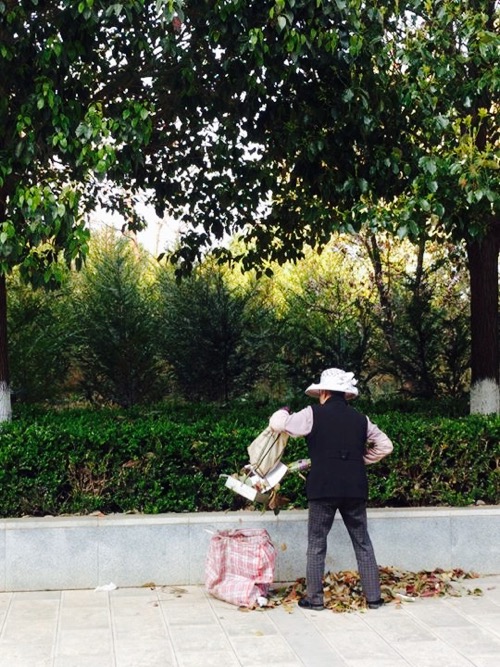 On new stone in a new town

Now swept away by Progress

Lines in a face never erased

← Stepping Off Meets the Public Remembering Another China in Kunming →