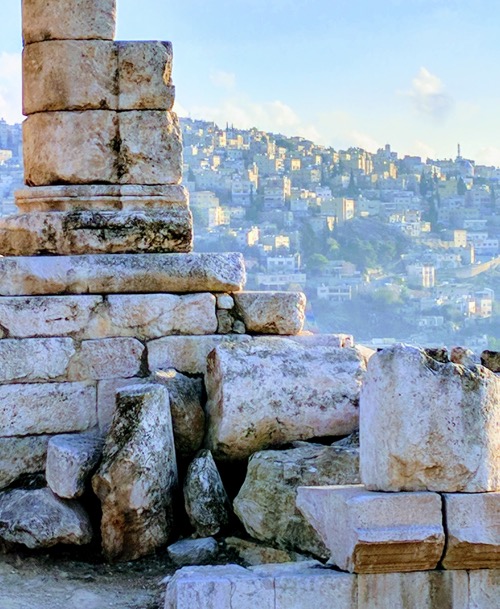 I’ve arrived in the Middle East, in Jordan.  It is winter here.  Yesterday afternoon I visited the Amman Citadel, a raised acropolis in the centre of the capital. It lies atop a prominent hill in the centre of the city, and as you walk around the ruins of Roman civilisation you look down on box-like limestone-coloured apartment buildings that huddle down steep hill sides. Flights of pigeons wheel about in the cold blue sky above. Looking down into the mini-panorama of a street below me I watched an old man walk along with a cane and a hatta, and two young boys were chased by an older man for some unknown reason. I felt like I was in the Middle East. 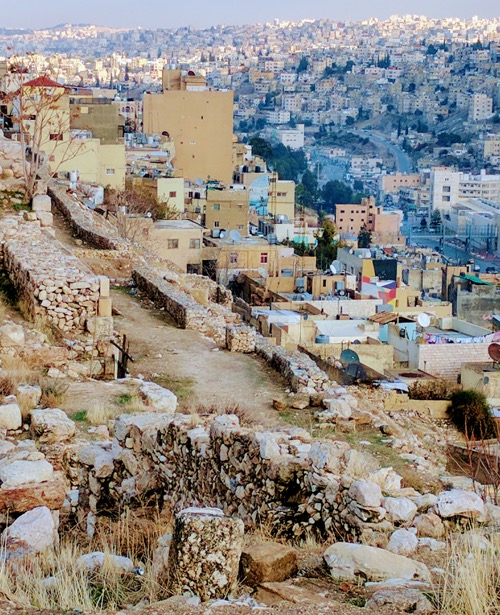 Standing on the Citadel you are also in a place that once had a Roman temple to Hercules at its centre.  When the temple was intact it would have radiated civic pride over the surrounding city with its massive stone columns and lofty stone steps leading up to an elevated portico. 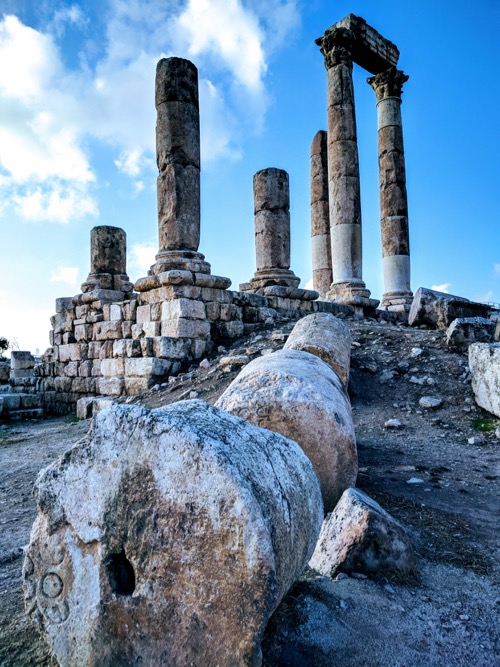 Atop this acropolis there is also an Umayad (Islamic) palace.  The following photo was taken from within this palace. 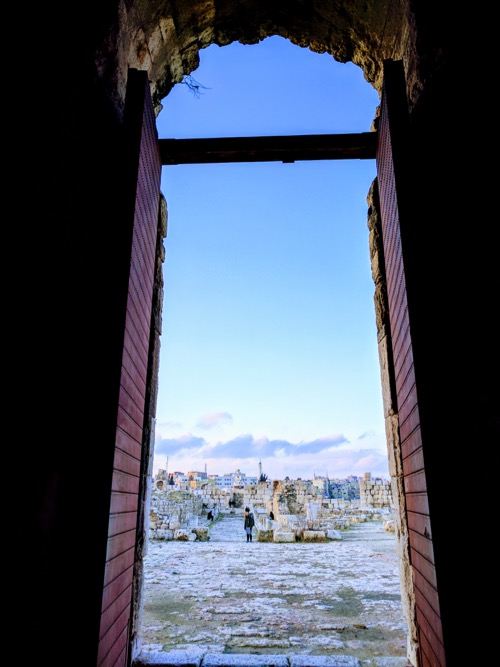 Amman is not an immediately charismatic city, but then I’m not a great lover of cities in general. 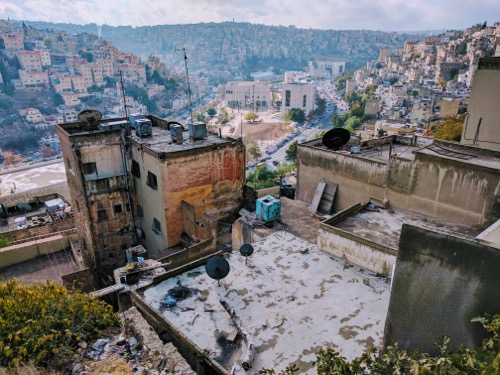 The constant and impatient beeping of horns that I hear in Amman is for me an expression of the culture here in the Middle East.

Let me explain.  I’m in an Arabic culture, and people speak loudly here.  Even at the souk, the local market, the sellers shout about their wares more loudly than in South Asia or South-East Asia. People repeat what they’ve just said once or several times, not because they think you haven’t heard them, but just to add emphasis to their already urgent bursts of speech. There is a slightly aggressive edge to the speech of people – admittedly more in the case of men than women. What a different approach to the polite and deferential interlocution of the Anglo-Saxon chap. It turns out that the only way I can co-exist with Arabic cultural manners without getting irritable is to enter into the spirit of the thing and start using some of these speech patterns myself. Otherwise I don’t get a chance to talk. Still I’d not want to live forever in a place where I have to employ this heavy-traffic congestion tactic in my daily conversation. 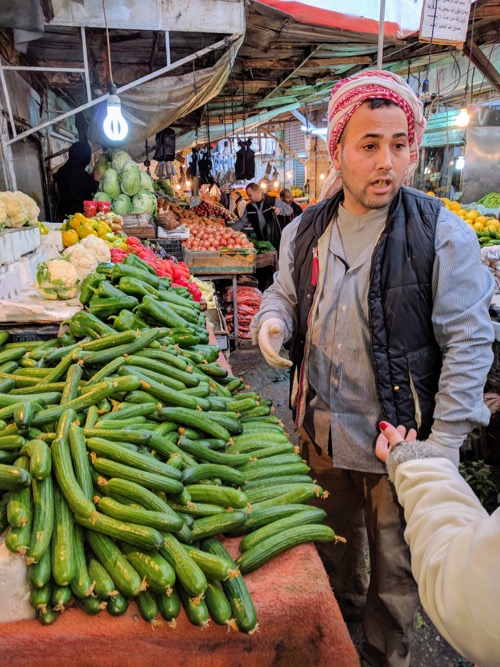 Admittedly people seem to have fun with this style of communication.  There often seems to be an element of the mischievous amid the high volume.

As we passed a shop of Arabic sweets the man offered us one to try. In a local delhi the previous day the shop owner had, noticing we were foreigners, offered us a banana each – as we had been looking at fruit to buy. This kind of thing happened again and again.  People in Jordan genuinely are hospitable and friendly: the evidence is in the shops and in the homes of the locals.

Recently I spent the day at an old Roman fort and sixth century stylite tower south of Amman.  On the way we passed this wadi (valley). 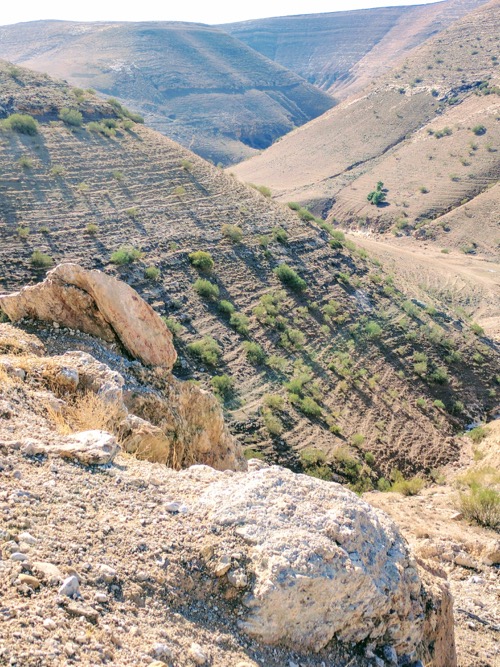 Driving out of Amman the hills were surprisingly populated for a desert landscape. Makeshift tent camps with dozens of brown-headed sheep and a scattering of trash blown by the wind were, I suppose, Bedouin residences. It was sad to see that some of today’s Bedu culture has a dilapidated and poverty-stricken appearance. 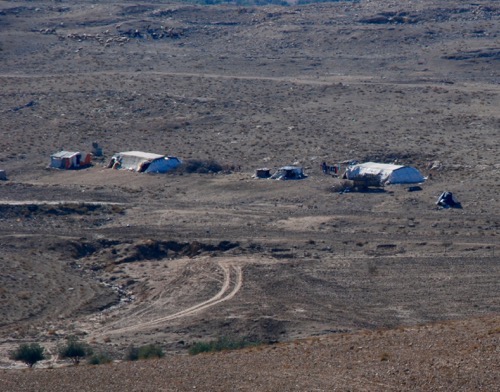 A large flock of sheep being herded somewhere on the steppe. 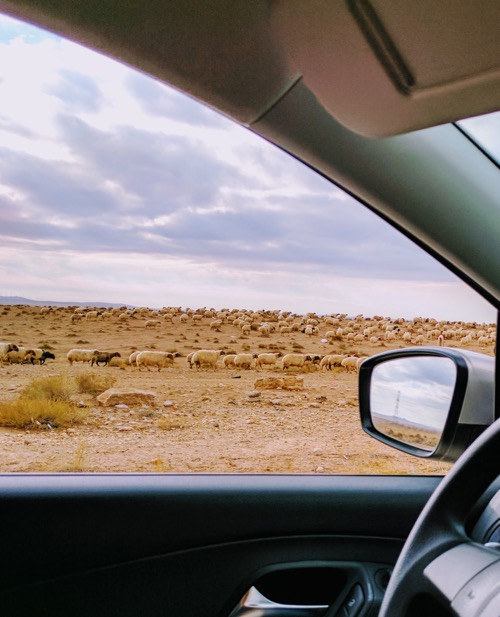 The air was cold and we were the only people visiting Umm ar Rasas, a Roman fort built 1600 years ago. 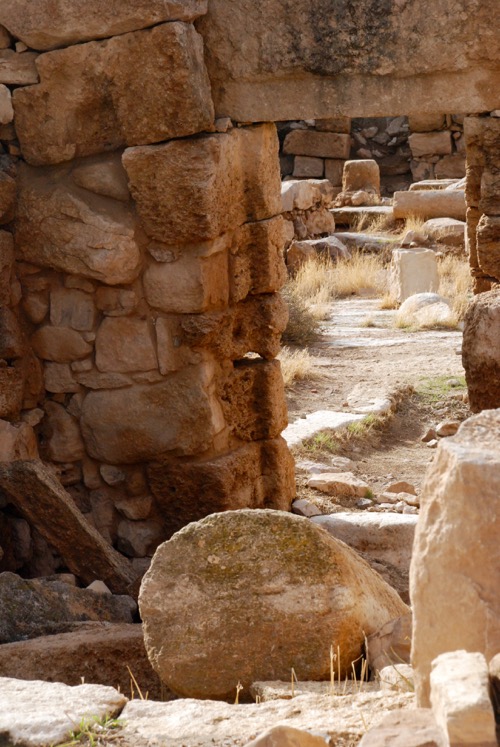 A small white cat followed me through the tumble of old stones, purring softly. 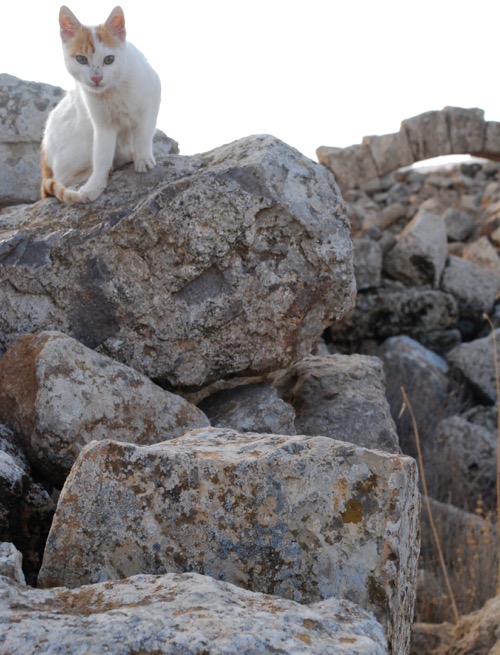 You could climb over the remains of the Roman world, cisterns and arches and walls and all, in a way that would never be permitted in a Western country. 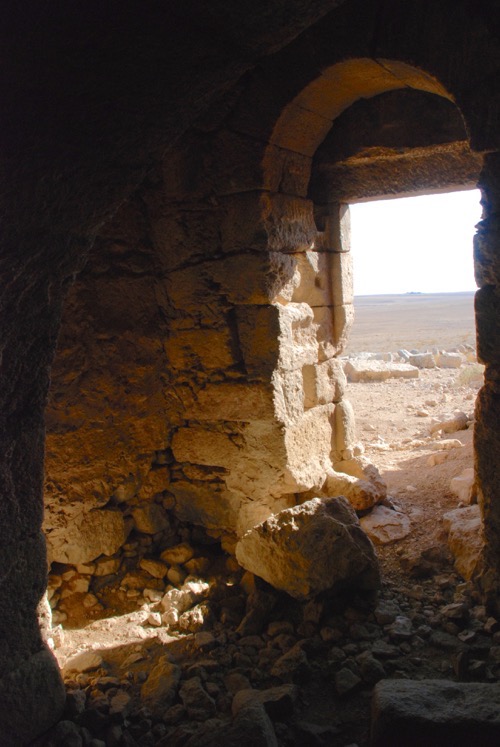 This is the interior of an early Christian church.  Jordan used to have lions roaming its wild places but they have been locally extinct since the nineteenth century because of hunting pressures.  You can still see them on the intricate floor mosaics on the church on top of Mt. Nebo that were made in the sixth century AD. 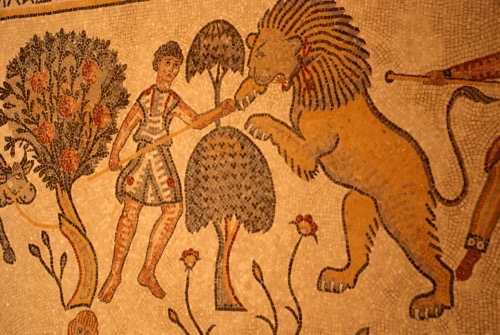 Many Westerners think of the Middle East as the heart of Islam, however it was Christian before it was Muslim, and there are still many Christians living here.  This morning I went to a service at the Syriac Orthodox Church in Amman, the Cathedral of St. Ephrem.  Since the Council of Chalcedon in 451 AD in present day Turkey, Christians split in two over a semantic issue.  Most Christians we know in the West went the way of Rome and its descendants, however there are a variety of Eastern Christian denominations who still think they got it right after this schism, and are really the true Christian church.  I was intrigued to see what this alternative version of Christianity looked like.  Indeed it is very different.  As I walked into the cathedral a powerful aroma of incense came over me.  The priest faced away from the congregation and sang in a haunting and mournful Syriac language. 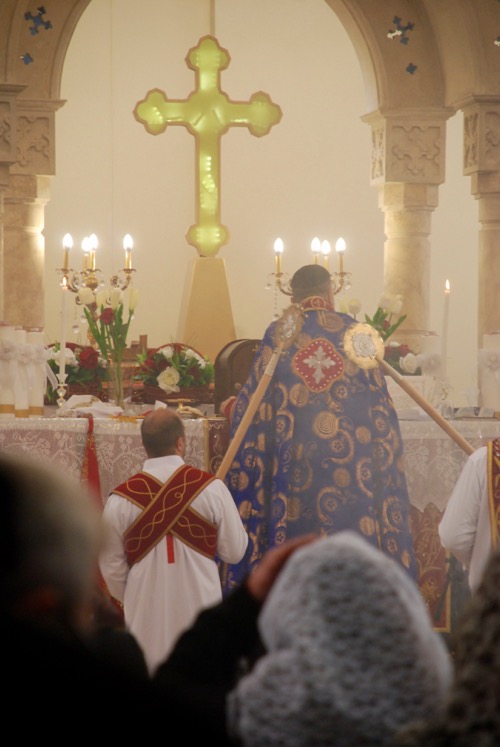 Those long staffs have small bells on the end which are shaken as part of the liturgical music.  As the largely Iraqi and Syrian congregation (some refugees from Aleppo) joined in the singing I felt moved by the mystery and pathos of the moment.

Tomorrow, finally, I will see Petra.