Spices and Power in the Indian Ocean 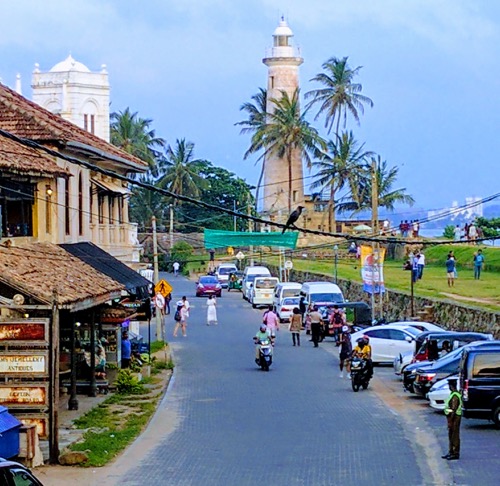 I’m in Galle, on the south-east coast of Sri Lanka. From the rooftop terrace above the hotel room I’m sitting in the sound of surf gently crumbling on the reef beyond the Fort’s ramparts can be heard, and the breathing Indian ocean is glimpsed through tall coconut trees. The old city juts out into the tropical waters of the Indian Ocean, surrounded and held by thick ramparts and tall bastions built by the Dutch East Indian Company from around 1640. Its a calm enclave in the world of ugly and chaotic modern Sri Lanka. Dilapidated colonial mansions act as over-priced guesthouses, and tuk tuk drivers ply their trade where Moorish pedlars once worked on Pedlar Street. When you see brightly coloured sari-wearing women swish by, or Sri Lankan men stare intently and brazenly at a passing European female, you know you’re in Sri Lanka, but you’re also in what is the closest you’ll ever get to a seventeenth century fortified coastal port town on the Indian Ocean. Walking in an old Dutch church cemetery and reading the faded inscription on a tomb stone about the loss of an English sea captain’s daughter below a skull and cross-bones, made me remember that this could be a location in a Patrick O’Brian novel or a Pirates of the Caribbean movie. 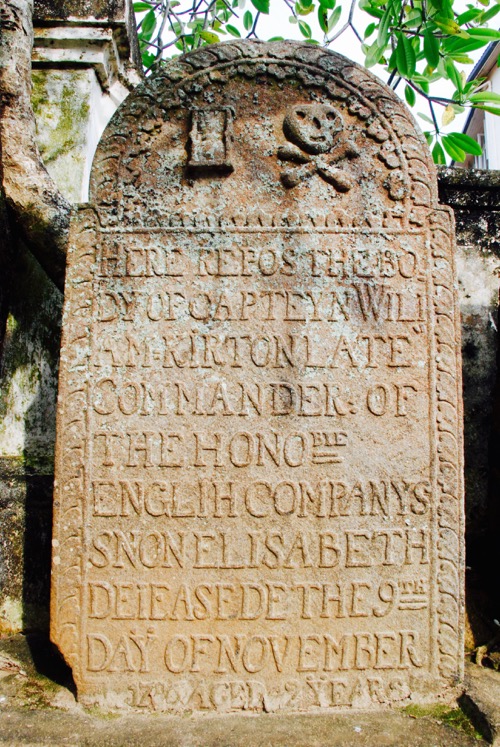 In the morning I watched fishermen come back from the ocean in spindly vessels. 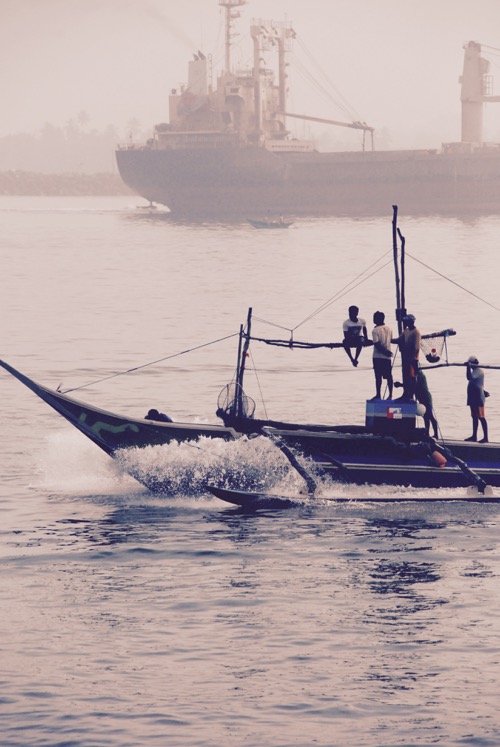 These vessels were laden with pelagic fish to be sold by the very beach where the boats and pulled up on the sand. 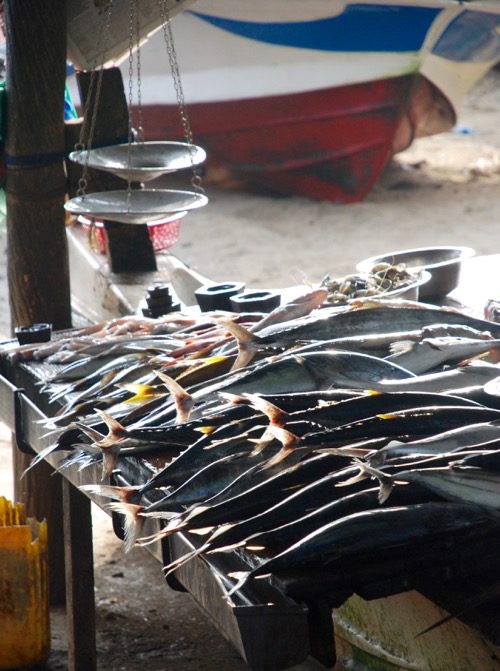 A couple of cows grazed along a section of the fort’s ramparts. 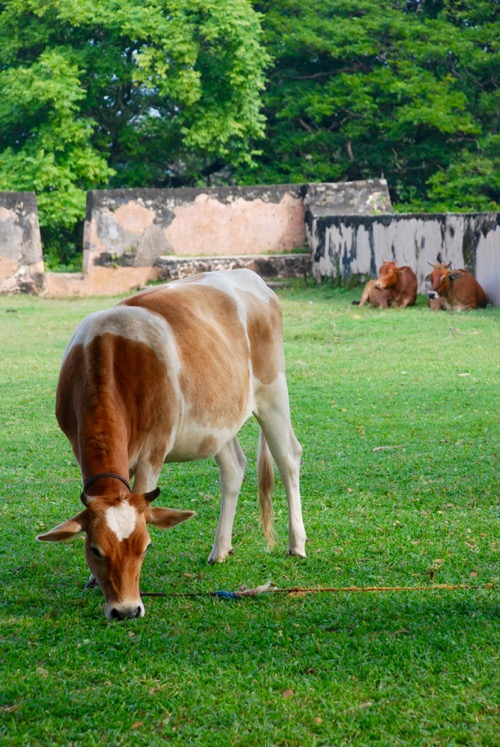 It is a bucolic atmosphere that also attracts wedding photographers. 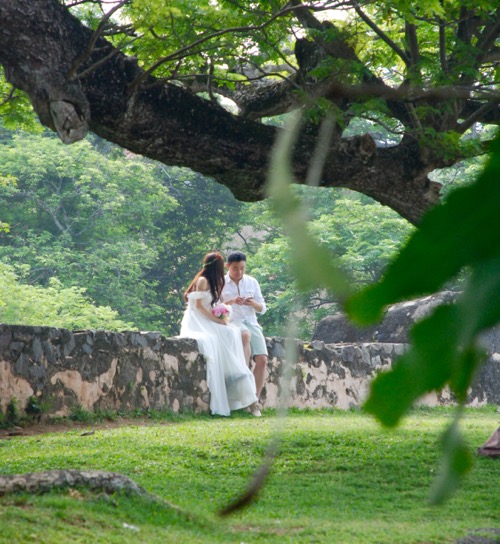 I walked under one of the Fort’s gates, and looked up at the insignia: VOC (Dutch for Dutch East India Company being VereenigdeOost-Indische Compagnie or VOC)). 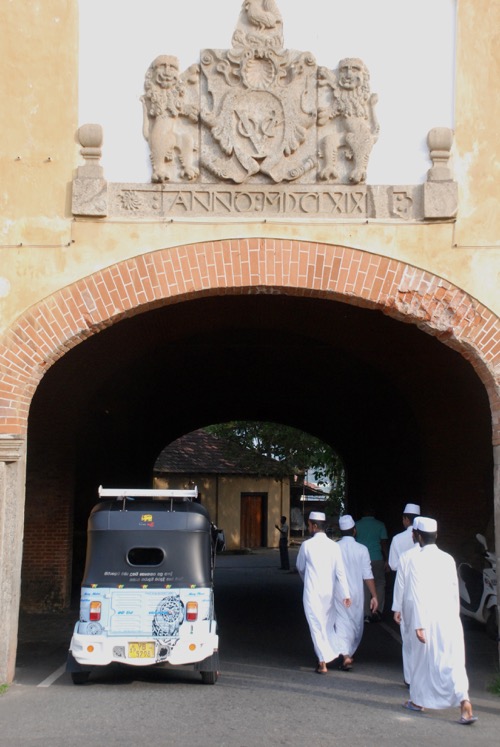 Because of course in Galle Fort you’re smack bang on the principal trading route of the world’s first corporation.

I am from Western Australia and have lived in Tasmania. The Dutch, through the VOC, dominated my part of the world – the rim of the Indian Ocean – more than any other European power. They had more than twice as many ships as the English East India Company, and made far, far more money over the course of history in this ocean and its islands. Tasmania is named after Dutchman Abel Tasman. Western Australia famously has the wreck of the Batavia a few hundred kms north of Perth, one of the VOC’s greatest ships. The Dutch had a big presence in present day Indonesia, as well as Formosa (present day Taiwan) and even as far up as Japan. Dutch merchantmen would sail from places like here in Sri Lanka back to Europe around Africa to Europe carrying spices. By forgoing allowing individual traders (which lowers the price for the consumer through force of market competition) and forming a monopoly, the VOC got very very rich.  Investors were issued paper certificates verifying their share ownership, and could trade these shares on the Amsterdam Stock Exchange.  As a corporation they had their own large and well trained military force and minted their own coins, things not even our most audacious corporations have managed today. By 1670 it was the richest corporation in the world, while being able to pay its shareholders a dividend of 40%.  The numbers were impressive: 50,000 employees, 30,000 fighting men and 200 ships. 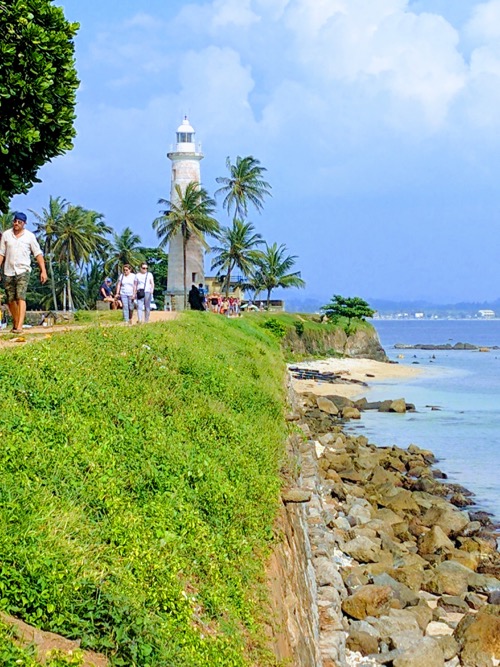 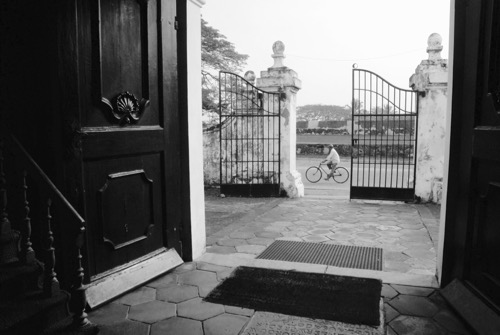 But here is the irony.  I’m happy to be here wondering around its streets and its faded colonial verandahs, watching the sunset from the ramparts while the lighthouse stands tall over the calm Indian Ocean. But as well as being a beautiful place Galle Fort is a creation and symbol of power of the world’s first corporation. Today thousands of lawyers and administrators are negotiating international trade deals that can trump the edicts of nation states, while advertising and marketing executives cleverly push product through the destructive cycle of conspicuous consumption. With such a state of affairs it is not that difficult to argue that commercial corporations are increasingly unmoored from acting in the public interest, or to be frank, have wrecked and are wrecking most of the distinctive cultures and ecosystems of the planet. With this in mind Galle Fort has a faded beauty and romance, but its also a symbol of where human history took a very inauspicious step down a path that has lead to much of the killing of the planet we are witnessing.

Of course share holders back in Holland loved the VOC, as share holders love having a stake in the profit sheets of McDonald’s or Facebook today. Corporations can weather risk and achieve economies of scale in ways that individuals can’t manage. They have advantages. But corporate power purely pursuing profit maximization while employing the smartest accountants, lawyers and PR spinners, can, on a finite and unregulated planet, stuff things up. Its stuffs things up for people and animal and plant species who don’t have the same market capitalization, who can’t employ the same legions of professional retainers to pursue their cause. 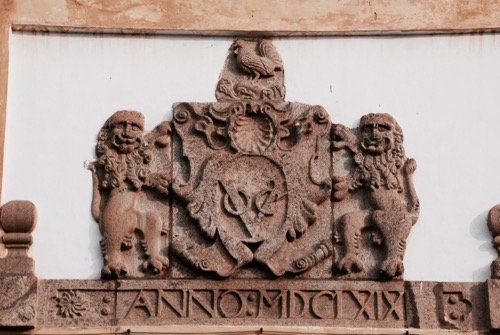 The stone insignia of the VOC above a gate in Galle Fort shows a cock and two lions, two clear symbols of power and virility. The headquarters of Apple will open in 2017 and are a giant glass circle to house 13 thousand employees, with orchards and parks. Corporations can leave gorgeous monuments, but increasingly they are taking on a sinister aspect as their thrusting young retainers help them to evade paying national taxes and speed up rates of conspicuous consumption.

The VOC was sending huge numbers of sailing ships south-west from here from the 1680s to 1720s, which is also the golden age of the pirate. Spices meant wealth if you had them in Europe at this time. The Mary Rose was an English ship that sank off the south coast of England in 1545.  In the 1980s it was raised from the ocean floor.  Just about ever sailor’s remains were found with a bunch of peppercorn on his person, illustrating the way in which spices were once a tangible and portable store of value.  Coins jangled around these parts.  Many of the VOC ships would have been targeted by pirates who would careen their vessels on the beaches of Reunion Island and Mauritius. Men and women who lived in these houses may well have had personal experience with the pillage of pirates on the high seas. The VOC itself was not unused to violence abroad – further east it imposed the death penalty on anyone caught growing, stealing or possessing nutmeg or clove plants without authorisation.  In the Banda Island of present day Indonesia the VOC killed thousands of men over the age of fifteen.  The VOC reduced the population of the isles from 15,000 to 600 within 15 years of arriving.  Spices are at the root of today’s global economy, but some of the spices were tainted by blood.  At Galle Fort the ramparts locals and tourists stroll along may look romantic, but they were built with a clear military intention, to safeguard a monopoly trade and its workers and sailors. So much for the shadowy history of this little peninsular in the warm waters of the Indian Ocean.  Time I went for a swim at the uncomplicated and sandy beach at the base of the ramparts.  Let the ocean wash away the dirt.