I’ve just finished travelling from Perth, to south-east Queensland and north-east NSW, exploring the subtropical landscape and visiting friends and family, and then down to the small but cultured Victorian country town of Castlemaine, to talk at a festival along with writers such as Bruce Pascoe.

Castlemaine takes my vote for nicest small country town in Australia.  I am truly impressed by the amount of art galleries, cafes, stylish and eclectic bars and beautifully renovated nineteenth century architecture in this town of only nine thousand people.  Its basically an extension of inner north Melbourne in a Gold Rush town 120kms north of the city. 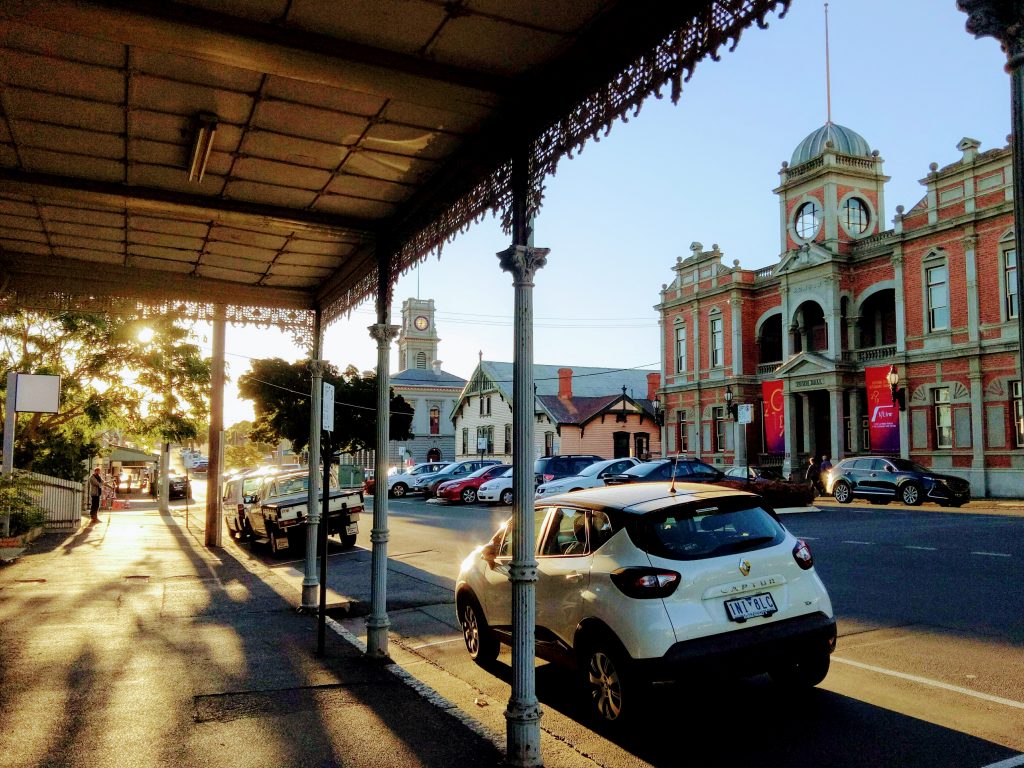 Walking the streets at six o’clock the first night I arrived with a warm sun shining, I was so impressed by this place.  It’s a mid nineteenth century town full of wide streets, and stately, English facades of banks and hotels of stone and wrought iron balconies, and thick hedges with verandah fronted weather-board houses snugly situated behind.  Old European trees line the streets. 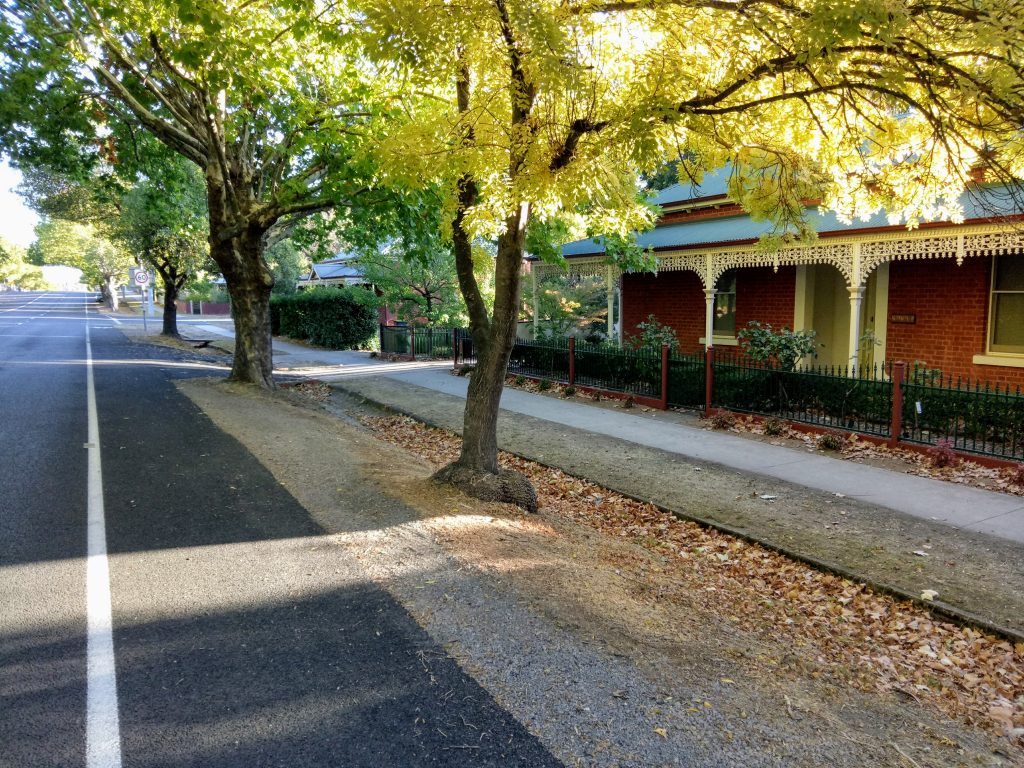 The place has various arty Melbourne retirees and a sprinkling of younger people who have colonised the town and add a sense of culture and intelligence to its beautiful and spacious streets.  The place also has the air of a wild West town, with so much intact English nineteenth-century architecture sitting serenely in the middle of arid, inland Ironbark country in Australia.  I have to say as I walked along its streets on my first night, amongst the thickly trunked London plane trees, across the wide streets and stone pavers, I almost envied Victorians with their much greater share of European history under the feet and before their eyes in daily life.  Much more historical atmosphere here than in Western Australian country towns.  On the down side one of these nice, ‘quaint’ wooden old houses costs $650k.

This morning I was on a panel with Inga Simpson and Jessie Cole, at the Castlemaine State Festival, talking about the literature of landscape.  I’d read Inga Simpson’s book Understory before coming east.  The book recounts her time living in a forest in the Sunshine coast hinterland in south-east Queensland.  Chapters of the book have the names of trees endemic to that area, for example Cedar, Brush Box, Spotted Gum, Flame Tree, Bunya, and Lilly Pilly.  Back in Perth as I read the book I looked at images of the different trees online and realised that at least some of these trees have been planted as streets trees in Perth (for example brush box) or ornamental trees at UWA (for example the Flame tree).  I’ve known some of these trees my whole life, despite living thousands of kms away from there endemic area.  Australia’s Coat of Arms has a kangaroo and an emu on, but as Australians we share more aspects of the natural world than these two animals.  To see a giant Brush Box in its native region of the country is a reminder of the trees that make up this country.

A friend of mine lives just north of Nimbin in north-east NSW and last weekend it was a pleasure and a privilege to stay on his property in a small wooden cabin.  Space and birdsong and subtropical sunshine. 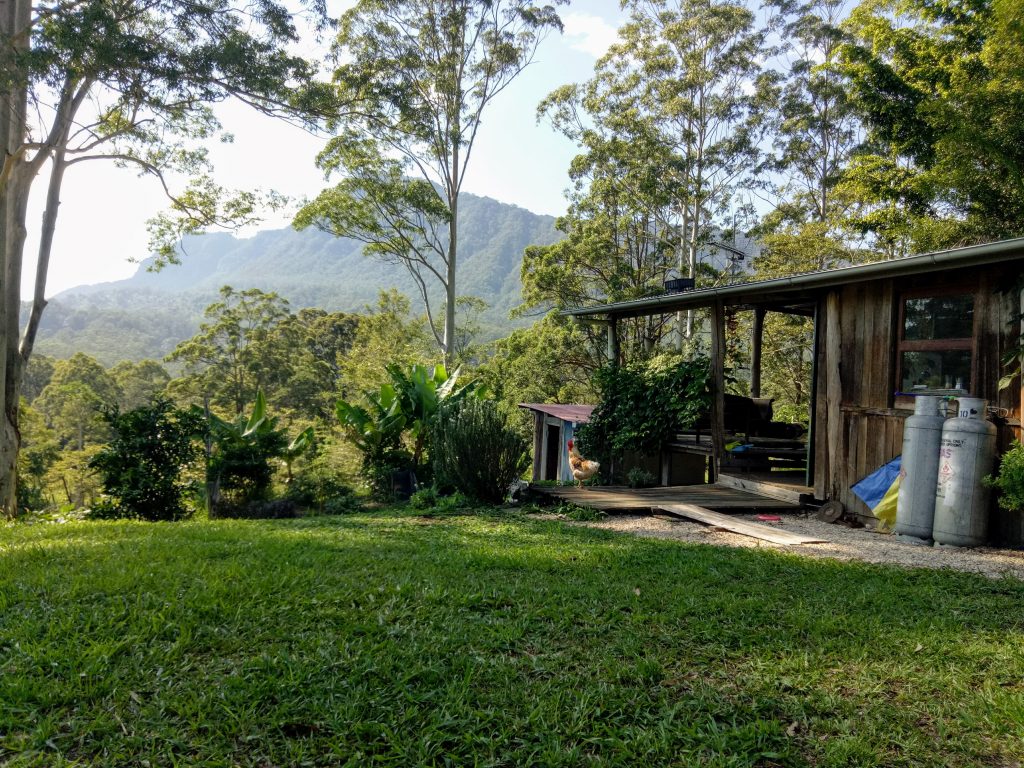 Just out of Nimbin we found a little rainforest creek one day and lay down in the cool fresh water and looked up at the ficus and palm leaves in the canopy and forgot about everything else but the feeling of cool water flowing down from the mountains. 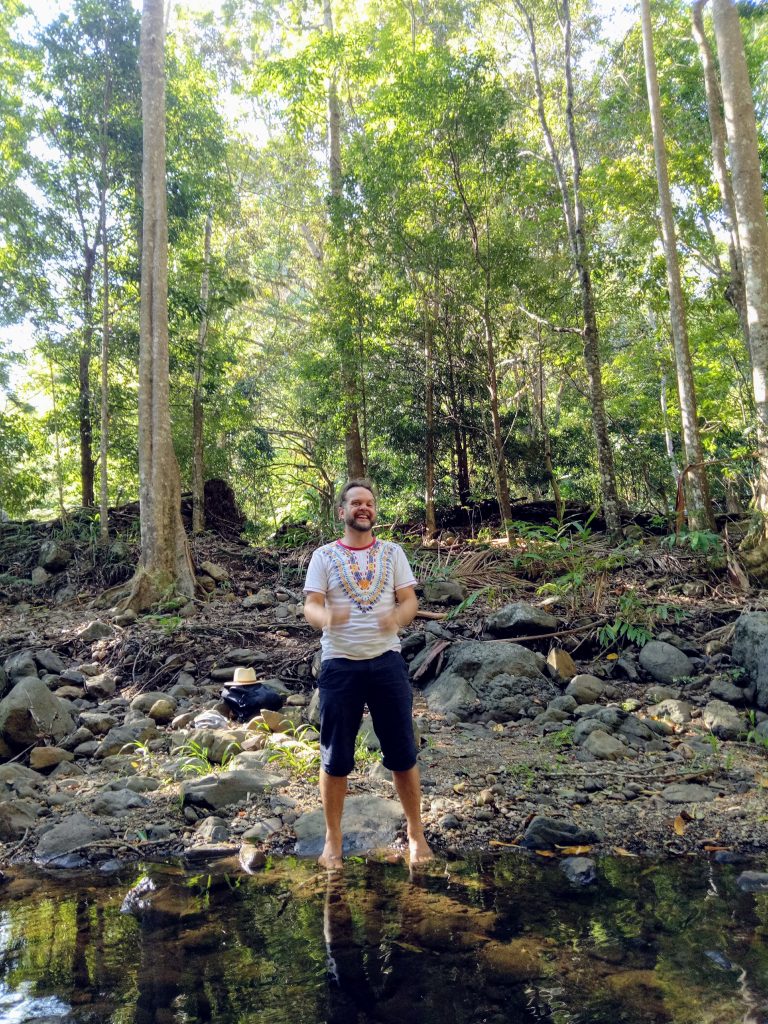 After a bit of a journey through the Border Ranges National Park the view from the edge of a 24 million year old volcanic caldera was tinted by the setting sun. 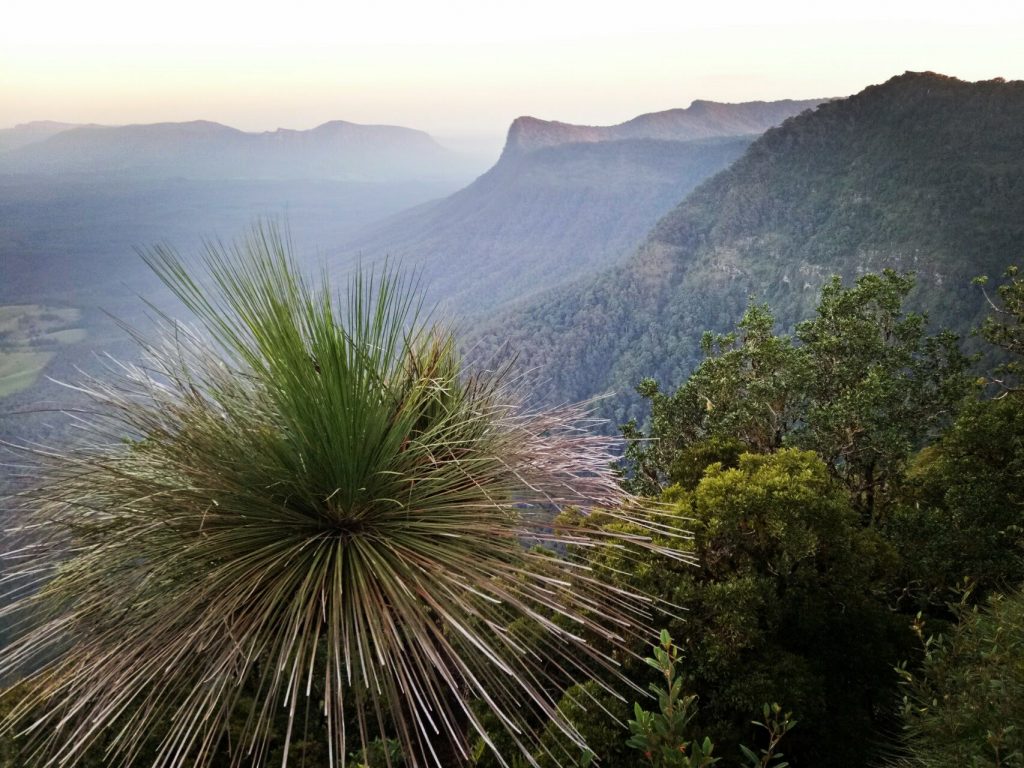 Later in the trip I was reminded of the beauty of the Byron Bay hinterland, a mosaic of green paddocks and avocado and macadamia orchards. 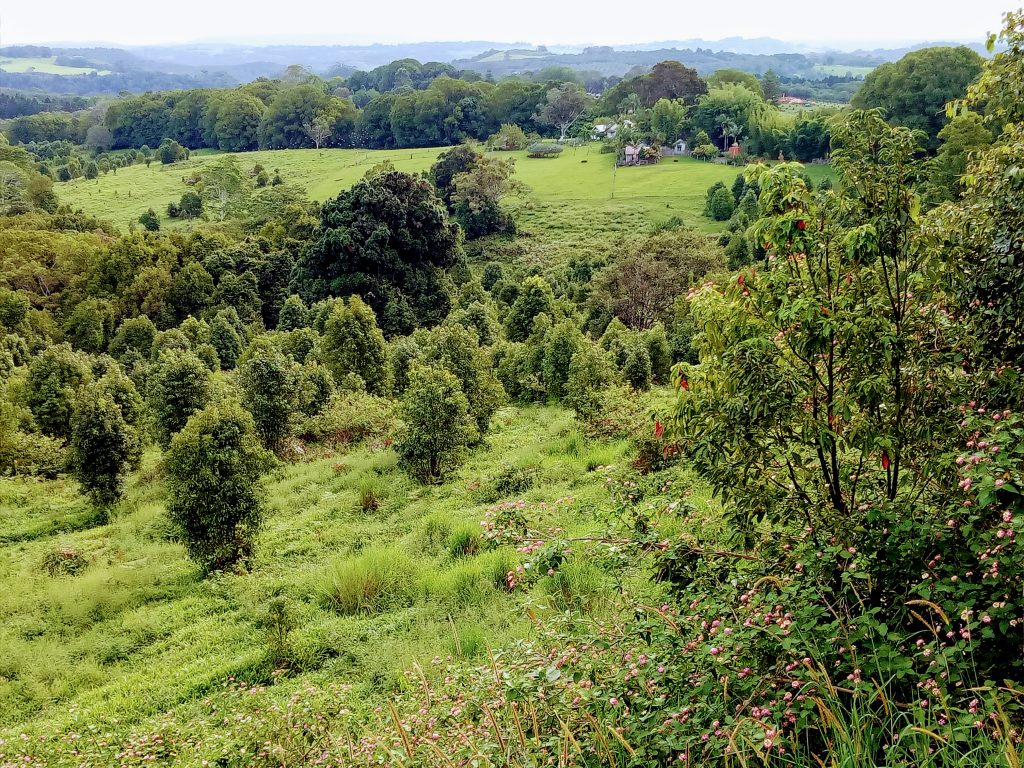 The land around here is orchards and old trees and rolling green hills – like what England would have been like a hundred years ago in the south-west, but with a subtropical feel.  I for one feel a concordance with this landscape. 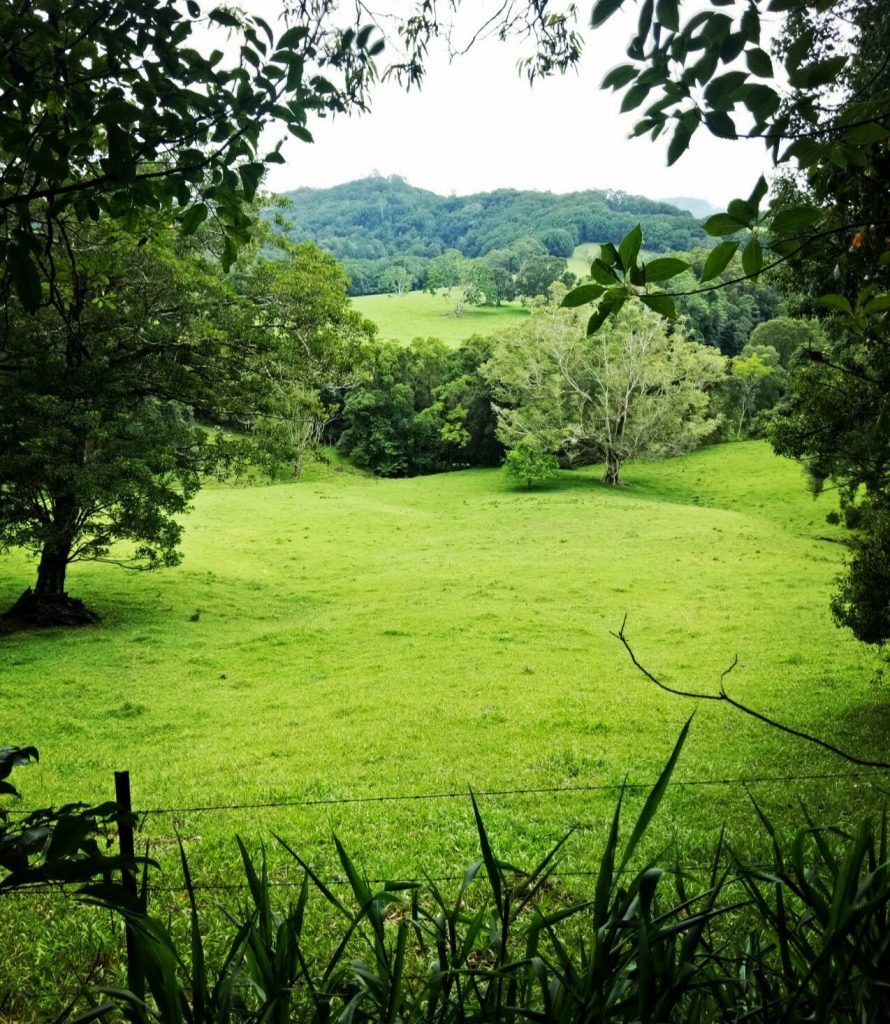 Walking up through Nightcap National Park along a gorge full of mature lowland rainforest trees and palms, the soundscape changed subtly.

The sounds of the native doves softly booming now and again, with their low cooing calls, over the forest’s quiet, and the sound of the trickling water in the creek below.  I can almost close my eyes and recall this soundscape and feel a blessed tranquility descend over me. 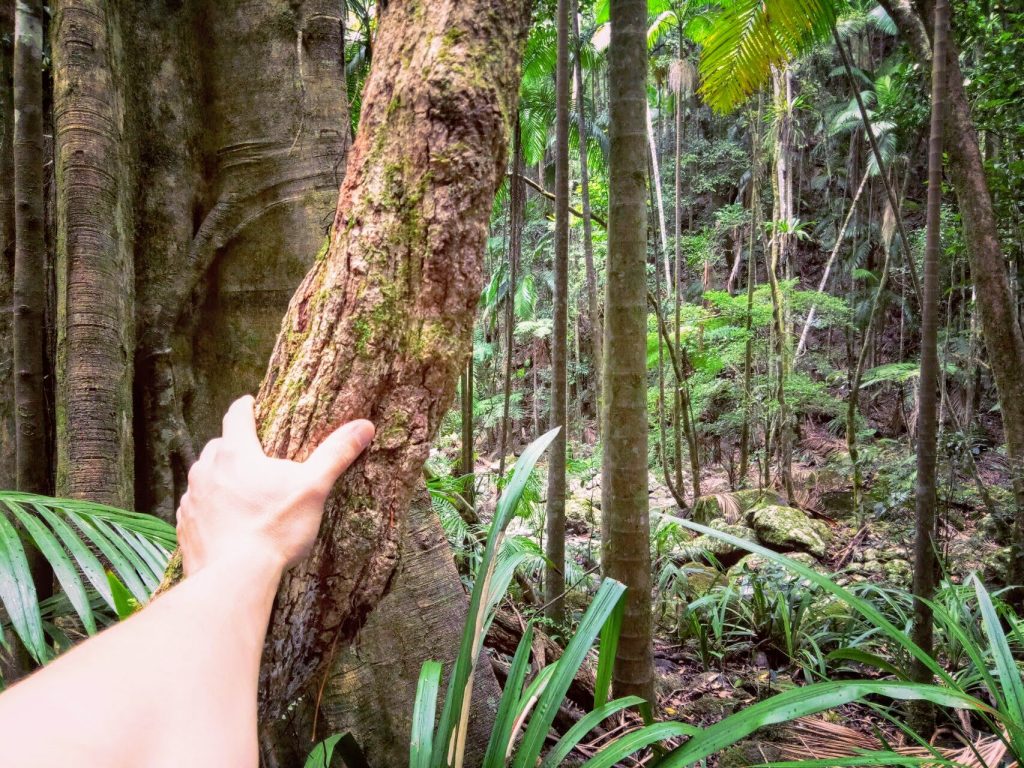 This trip has reminded me of some of the things about Australia that I love.

I return to Perth tomorrow morning.